1d6 Things Found In The Thaw

This set of trinkets was created for C. A. Berlitz in exchange for a tip on Ko-Fi.

1d6 Items Found In The Thaw

To get your own set of trinkets, leave a tip on Ko-Fi!

1d6 Items In An Entertainer’s Pack

As part of my continued effort to make 5e’s starting equipment packs more interesting, today I present the Entertainer’s Pack!

The entertainer’s pack is a sturdy leather backpack decorated with swirls of green and red pigment. Thick straps hold a bedroll over the main opening of the pack, making it difficult to access quickly – perfect if you need to put it down beside a stage or table while you perform. The interior of the pack is divided into different sized compartments to make for efficient storage of all the items you might need.

As well as the general items carried by most travelling entertainers – a couple of different costumes, candles and rations, and a disguise kit – the entertainer’s pack contains the following:

1d6 Item’s In A Dungeoneer’s Pack

The dungeoneer’s pack is a sturdy canvas backpack coated with wax on the outside and lined with thick fur on the inside. A series of hook-and-eye fasteners inside the pack can be undone to allow the whole bag to unfold and open up into a makeshift blanket. Thick leather loops attached to the outside of the pack make it easy to hang tools like hammers and crowbars from it, and also mean it can be hung from wall mountings to keep it out of reach of scavengers overnight.

In addition to the essentials for any delve into the deep places – a crowbar, a hammer and pitons, rope, torches, and the like – the dungeoneer’s kit contains the following:

For your own table of trinkets, written to whatever prompt you like, drop me a tip on Ko-Fi!

1d6 Items in a Scholar’s Pack

The scholar’s pack is a compact satchel made of sturdy green leather stitched with heavy gold thread. Brass buckles hold the main flap tight to the body, and a leather handle makes for easy carrying. A detachable shoulder strap can be stored in the pocket on the front of the main flap, while a larger external back pocket makes for easy access to sheets of parchment or a slim volume.

Alongside the more common scholar’s materials like bottles of ink, an ink pen or quill, sheets of parchment, a bag of sand, and the like, the scholar’s pack contains the following:

Drop me a tip on Ko-Fi to get your own table of trinkets on whatever prompt you like!

1d6 Items in the Priest’s Pack

The priest’s bag is a large backpack made of simple leather, uncoloured and relatively unadorned. The backpack has thick, cushioned shoulder straps and a padded belt that sits on the hips and fastens at the front of the waist to aid in weight distribution – a must-have for a travelling priest set on spreading the good word. Straps on the bottom of the backpack give external space to carry a rolled up tent and bedroll.

Alongside the day-to-day items of a travelling priest – a blanket, candles, a tinderbox, an alms box, incense, and vestements – the pack also contains the following:

If you would like your own table of trinkets drop me a tip on Ko-Fi!

1d6 Items in the Component Pouch

The component pouch is a small bag made of worn, faded red leather, lined on the inside with blue felt. Supple leather drawstrings pull the mouth shut and are long enough to loop around a belt to ease carrying.

The inside of the pouch is divided into one large compartment and two smaller ones. There are three slim pockets in the lining of the larger compartment to hold longer items like sprigs of wood or sticks of graphite.

The pouch always has a vague smell of must and patchouli, along with the combined smells of whatever is currently being stored inside it.

Alongside more common spell components like guano, chalk, iron filings, charcoal, and the like, the pouch contains the following:

1d6 Items In A Burglar’s Pack

The burglar’s pack is a slim, low-profile backpack made of green canvas so dark that it is almost black, designed to sit tight against the wearer’s back. Several hooks and slim sleeves attached to the outside of the pack allow quick access to essential items, while multiple external pockets allow other necessary tools to be kept close to hand wiithout needing to access the deep main pocket.

As well as the staples – a bag of ball bearings, string, candles, a crowbar and hammer, pitons, a hooded lantern with oil, and the like – the burglar’s pack contains the following:

If you would like your own table of trinkets, drop me a tip on Ko-Fi!

1d6 Items Unearthed On The Beach

Yesterday I released a new Jenga-based party game on itch.io, Exit, Pursued by a Bear. Go grab a copy here. 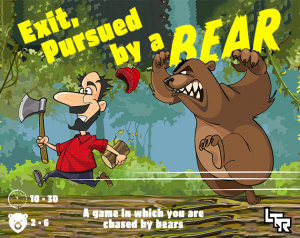 This set of trinkets was created for John Gregory in exchange for a tip on Ko-Fi. John is responsible for one of my favourite ZineQuest releases, Gourmet Street, so it was an absolute pleasure to put together a table of weird things you might dig up on the beach for him.

1d6 Items Unearthed on the Beach

If you want your own table of items, drop me a tip on Ko-Fi and give me a theme to play with!

@leannipop requested trinkets for “a human sorcerer who got her magic from a white dragon. She is a sage and a professor at the local university”.

Feel free to use these trinkets in your own games – and if you do, I’d love to hear about it!

If you want your own table of trinkets, drop me a tip on Ko-Fi!

Celli Dustgrasp’s cabin contains a wealth of treasures in the form of valuable items she uses to create her magical items, and – of course – the items themselves.

In the previous post I gave you descriptions of three magical items that characters might find in Celli’s cellar. Today I bring you stats to go with them, so that once your players have got hold of them they can actually put them to use. Before that, though, here is a small list of other less magical trinkets that characters might find in Celli’s home.

Celli’s cabin is packed to bursting with her creations – rods, staffs, wands, and staves of expert construction and potent magical ability. Here are three such items which may be obtained by a party travelling to the cabin.

This five-foot stave is made from three lengths of different woods – ash, elder, and rowan. The ends of each length twist into one another, creating an almost seamless transition between materials. A fist-sized ball of amber is set in the head of the stave, which is the ash end.

This stave can be wielded as a magic quarterstaff that grants a +2 bonus to attack and damage rolls made with it. While you are holding the stave, you also gain a +2 bonus to spell attack rolls.

The stave has 20 charges for the following properties. The stave regains 2d8+4 expended charges daily at dawn. If you expend the last charge, roll a d20. On a 1, the stave loses all its magical properties and begins to sprout leaves. Over the course of the next day a healthy tree grows from the place where the stave lies. The tree is 60 feet tall and has a 5-foot diameter trunk, and its branches at the top spread out in a 20-foot radius.

Plant Tongue. Once per day, you can cast speak with plants without expending a spell slot. The stave regains this ability daily at dawn.

Spells. While holding Woodweird, you can use an action to expend 1 or more of its charges to cast one of the following spells from it, using your spell save DC and spell attack bonus: barkskin (2 charges), entangle (1 charge), grasping vine (4 charges), plant growth (3 charges), transport via plants (6 charges), or tree stride (5 charges).

Retributive Strike. You can use an action to break the stave over your knee or against a solid surface, performing a retributive strike. The stave is destroyed and releases its remaining magic in an explosion that expands to fill a 30-foot-radius sphere centered on it.

You have a 50 percent change to instantly travel to a random plane of existence, avoiding the explosion. If you fail to avoid the effect, you take force damage equal to 16 x the number of charges in the stave. Every other creature in the area must make a DC 17 Dexterity saving throw. On a failed save, a creature takes an amount of damage based on how far away it is from the point of origin, as shown in the following table. On a successful save, a creature takes half as much damage.

Wand of Withering wand, rare (requires attunement by a spellcaster)

This short, fat wand is 5 inches in length. It is made of a dark, almost black wood and is uniformly thick with no taper at either end. One half is knurled in a diamond pattern to improve grip. The other half is perfectly smooth. A small gold disc is set into the smooth end like a cap.

This wand has 7 charges. While holding it, you can use an action to expend 1 of its charges to cause a thin black ray to streak from the tip toward a creature you can see within 60 feet of you. Make a ranged attack roll against the creature using your spell attack bonus. On a hit, the wand deals 2d10 necrotic damage to the target. In addition, the target must succeed on a DC 15 Constitution saving throw or have disadvantage for one hour on any ability check or saving throw that uses Strength or Constitution.

The wand regains 1d6+1 expended charges daily at dawn. If you expend the wand’s last charge, roll a d20. On a 1, the wand crumbles into ashes and is destroyed.

This rod is a 2-foot long twisted glass rod. The glass appears to be naturally formed, the result of lightning striking sand. There is no obvious place to hold it. Strands of some gossamer blue substance are streaked through the inside of the glass.

You have resistance to lightning damage while you hold this rod.

The rod has 10 charges. While holding it, you can use an action to cast one of the following spells from it, using your spell save DC: chain lightning (6 charges), lightning bolt (5th-level version, 5 charges), protection from energy (lightning type only, 3 charges), or witch bolt (1 charge).

The rod regains 1d6+4 expended charges daily at dawn. If you expend the last charge, roll a d20. On a 1, the rod shatters into shards of glass and is destroyed.

The artwork used on the image for this post is ©2018 by Samantha Darcy. Used with permission. You can purchase this art pack – and plenty more amazing pieces by Samantha – here and follow her on Twitter @65thvictor.

Liked this post? Drop me a tip on Ko-Fi!