Under The Floorboards – Character Creation Preview

Some of you may be aware of a Kickstarter promotion running this month called Zine Quest, which encourages creators to launch short campaigns aimed at funding small RPG zines.

I’ve been hard at work on my campaign, a rules-lite game based on The Borrowers called Under the Floorboards, and the Kickstarter campaign is now live. I’m also very, very pleased to say that I hit my funding goal in the initial few hours of the campaign, and that we’re now heading towards stretch goals!

Under The Floorboards is a tabletop collaborative storytelling game for 2-5 players about tiny people living in a giant, hostile world, inspired by The Borrowers.

Build your family and the house in which they live, then embark on an expedition into the land of giants in order to collect the things you need to survive – without being seen.

The game uses a simple 2d6 system for conflict resolution and an easy-to-pick-up story-building system to help GMs build engaging scenes on the fly.

Under The Floorboards is a low-prep game designed for one shot play but with tools to enable campaign play over multiple sessions. The game provides locations, hazards, and tools to quickly design your own content to keep surprising your players, and is perfect for convention play or to keep on your shelf for game nights when your whole group can’t be there.

You can back Under The Floorboards on Kickstarter here.

As a small preview for readers of Loot The Room, here is the first section of the game’s character creation rules!

Pick your pronouns and give yourself a name. You can choose any name you like, but if you need inspiration you can roll 2d6 and pick the corresponding entry from the table below:

Decide as a group whether you all share the same family name or whether you have come together from disparate backgrounds, then either pick one family name to share or choose individual names. You may also decide that your character does not have a family name.

Family names for Floorboard Folk are generally descriptive, and reflect the area in the giants’ house where the family lives. Sometimes, of course, Floorboard Folk find themselves displaced and are forced to move. This may be because their home comes under threat – maybe the giants block up the mouse holes, or hire an exterminator who pumps lethal gas into the walls – or perhaps it is because they have been spotted by the giants and need to find a new home before theirs can be discovered.

As a group, discuss whether you live in the traditional home indicated by your family name, or decide whether you had to move somewhere else. If you have had to move, you should collectively decide what prompted this.

Find out more and back the project here!

FREELANCE is now available from the Loot The Room store or from itch.io! 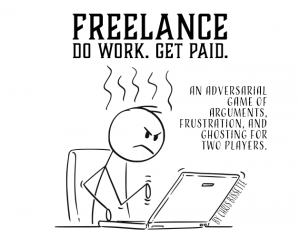 Do work. Get Paid.

FREELANCE is an adversarial game of arguments, frustration, and ghosting for two players.

You are a freelancer who has done work for a client but you have not yet been paid, and the shifty little fuck keeps finding ways to dodge the issue. Your goal is to get paid or explode into a ball of impotent rage trying.

Buy it now from the web store!

FREELANCE is also available from itch.io, where there are also Community Copies available for those who can’t afford to pay.