I’ve begun going through all the posts that pre-date the migration to this new site (which have all now been taken down, since they’re all missing images etc.) and updating them.

This was originally posted as part of my Monday Maps series. I still like the idea of revisiting old supplements and redrawing the maps in my style, though finding time for it is something I’ve always struggled with.

This post originally had a versions of the map with and without a grid, but I’m no longer able to locate them. Luckily I managed to pull the gridless version from Twitter, which is better than nothing!

In 1992 TSR published a very short module – only 8 pages long, and filled with more illustrations than text – that was given away for free with purchases from the TSR Mail Order Hobby Shop. That module was 9259 – The Jade Hare. It was only produced in a very small edition – I believe there was only one print run – and as far as I know was simply an attempt by TSR to support their trademark application for “Dragon Master”.

It’s a very short adventure – and I don’t remember how I came to have a physical copy of it – but I’m quite fond of it. It’s D&D distilled down to its essence – a mad warlock, a mysterious object to ‘recover’ (read: steal) from him, and a dungeon full of enemies to fight through.

Due to the fact that WoTC have made this adventure available via DMs Guild, I’m not going to provide any information about what the dungeon itself contains. You’re free to use this map in your own games, and stock it as you see fit – or you can pay the $1.99 being asked for it and see what surprises the original adventure held. 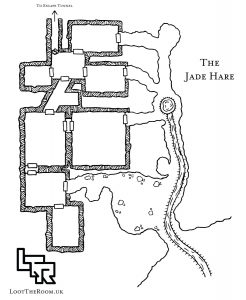