Whatever the reason the adventurer’s have travelled to Celli’s cabin, they may well find that when they arrive there the gnome is no longer alive. This month’s new monster is the Stranglebloom, a plant that germinates inside a living host before erupting from the mouth and throat of the now-dead body and setting out to plant more seeds in more new hosts.

Celli ventured out into her forest a few months ago to harvest new materials for her work, and was unfortunate enough to disturb a stranglebloom that had taken root among the trees. She believed she had escaped it safely, unaware that its seed was slowly growing in her body. A few short days ago, while organising things in her cellar, the seed finally germinated and the plant emerged from her carcas. It has been lying in wait there ever since, too unintelligent to understand the purpose of the flight of stairs in the center of the room. Luckily for it, a band of inquisitive adventurers are about to wander into its new lair.

Celli’s body makes for a grim sight. The gnome is suspended from a tangle of brambles, and flowers, her feet dangling limply above the dirt floor of the cellar, vines pouring out of her mouth and wrapping up around her head. While the party does battle with the stranglebloom they will also have to deal with staring into her dull, lifeless eyes, knowing that they arrived too late to save her.

At first glance a stranglebloom appears to be a humanoid who has got herself caught in a mass of vines and thorns. On closer inspection, though, it soon becomes apparent that the thick tendrils that hold the body in place are sprouting from the corpse’s mouth and throat, rising up to form a vivid corona of flowers behind the poor victim’s head.

Reap What You Sow. A stranglebloom has only one goal – to plant more seeds in a living host, which will go on to become another stranglebloom. They do not hunt for prey – they are not intelligent or fast enough for that – but instead simply lie in wait, feeding on the nutrients of their host body and whatever soil they have access to, content to bide their time until new hosts stumble into their vicinity.

Grappler. The creature has advantage on attack rolls against any creature grappled by it.

Bramble Vine. Melee Weapon Attack: +6 to hit, reach 10 ft., one target. Hit: 14 (2d10 + 3) bludgeoning damage. If the target is Medium or smaller, it is grappled (escape DC 14) and restrained until the grapple ends. The stranglebloom has two vines, each of which can grapple one target.

If the target is a humanoid, it must succeed on a DC 15 Constitution saving throw or be infected with a disease – a miniscule stranglebloom seed.

A humanoid host can carry only one stranglebloom seed at a time. Over two months, the seed moves to the chest cavity and takes root. In the week preceding the seed’s germination, the host starts to feel unwell, its speed is halved, and it has disadvantage on attack rolls, ability checks, and saving throws. Once it sprouts, vines and flowers burst from the host’s mouth and throat in 1 round, killing the host in the process and producing a new stranglebloom in its space.

If the disease is cured before the seed’s emergence, the ungerminated seed is disintegrated.

Pollen Cloud (3/Day): A 20-foot radius of pollen extends from the stranglebloom. The polled spreads to fill the space, ignoring cover and going around corners. Any creature in the affected space when the cloud appears, or that starts its turn in the cloud, must succeed on a DC 15 Constitution saving throw or be stunned for 1 minute. An affected creature can repeat the saving throw at the end of each of its turns, ending the effect on itself on a success.

If you’d prefer a PDF of this monster you can grab it here. 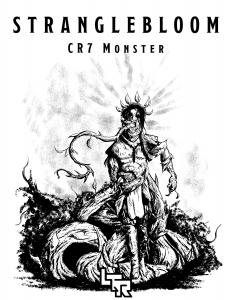