This was originally posted back in 2017, but the images were lost when I migrated sites. This re-post replaces those images, as well as correcting some typos and other issues with the post.

When I first began playing D&D in the early ’90s, I very quickly became obsessed with it. And as I got into my teens and started to have some money of my own, I of course spent a lot of said money on D&D products. One of my favourite places when I was younger was a used book shop in the local town. It was up a winding, cobbled alleyway (called The Wiend) at the end of a long row of terraced buildings, and at first glance appeared to be tiny; the door opened into a small, dark room absolutely packed to bursting with books – not just on the shelves, but spilling off them, stacked in heaps across the floor and on top of (and behind) the counter.

The shop wasn’t tiny, though. At the back of that first room, behind a bookcase that jutted out into what little space remained, was a doorway. A small passage – also lined with books – led to a staircase up to another similarly cluttered room, which itself had another staircase that led back up above the room downstairs. And once you got up there, things just got silly. The store filled the top floor of that row of shops, stretching out across all the other shops in a sequence of rooms with low ceilings, creaky floorboards, and barely any space that wasn’t filled with stacks upon stacks of books and magazines.

I spent hours upon hours of my formative years in that shop. One room in particular was almost entirely devoted to scifi and fantasy books – I discovered Terry Pratchett in that room, and Piers Anthony, and Brian Jacques, and too many other authors to list. But my favourite thing in that room was a low shelf tucked into a corner, which held binders absolutely packed to bursting with back issues of Dungeon and Dragon magazines. Every time I went to The Wiend I came home with one of those magazines – sometimes after spending hours sifting through them and picking one I liked, other times grabbing one at random.

As well as containing the incredible The Mud Sorcerer’s Tomb by Mike Shel – a spiritual successor to Tomb of Horrors – it contains an adventure by Chris Perkins called A Wizard’s Fate. I distinctly remember reading that adventure in the car on the way home the day I bought it, and grinning from ear to ear as I learned about the alchemist Elzid Natholin, his redemption from evil ways, and the cruel fate that fell upon him as a result of the actions of his imp familiar, Zotzpox. It’s a really fun adventure with some very memorable locations, and I thought that I’d draw one of those for today’s map. 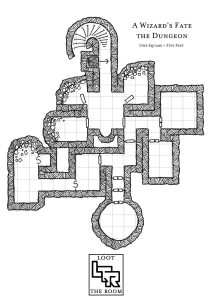 If you want the full details of the dungeon and the adventure as a whole, I’m afraid you’re going to have to track down a copy of Dungeon #37. It’s worth it, though.