One of the weirder things to come out of AD&D was Spelljammer, Jeff Grubb’s idea of what space would look like in a universe powered by magic rather than science. I won’t get into all the details – I could go on for days about it, and you’d probably be better served by reading the Wikipedia entry on Spelljammer if you aren’t familiar with it – but trust me when I say that it was weird as hell. Oh, and fun as hell, too.

I always enjoyed the fact that so many of the ships were designed to resemble animals – particularly fish and birds. Lost Ships by Ed Greenwood has some really cool designs in it, and a lot of information that fueled many of my early D&D games. Today’s map is an homage to Spelljammer, and in particular that book. 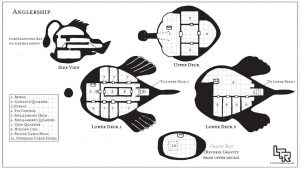 The Anglership is a fighting vessel designed to play the long game. It lies in wait, its crew sustained on the supplies stored in two cargo bays, until its prey draws near. Once the lure has drawn in the fatally curious it lashes out, crippling the prey with lightning. With that done the lure can be whipped up and out of the way, both to protect the rear of the ship and to allow the jutting ‘jaws’ of the Anglership to ram their new conquest and crush any hope of escape.