On Saturday I appeared on The RPG Lab’s Twitch channel with a handful of really talented creators, where we were discussing D&D monsters and attempting to combine some already-existing creatures into something new and interesting.

For my mashup I chose to combine two of my favourite monsters – the Purple Worm and the Gelatinous Cube – creating a rolling ooze worm that I dubbed the Gummy Worm.

If you head over to The RPG Lab you’ll be able to find the VOD of the stream, where I talk about some of the design decisions that went into creating this thing. I’m not sure how long that will remain available, so in a future post I’ll write at more length about combining existing monsters into new creations, and we’ll work on creating some more mashups.

For now you can download the Gummy Worm, and use the adventure hooks here to introduce it into your games. Enjoy! 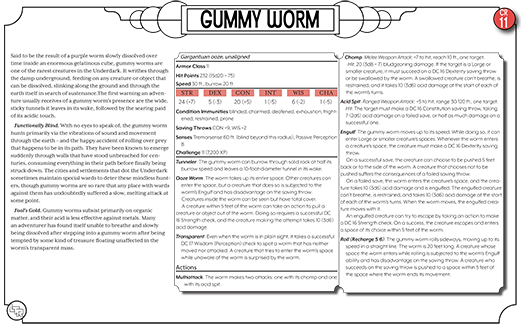 These hooks are designed to be used while your party are underground, be it in tunnels and cave system or the Underdark itself.

Sign up now to be notified of new releases!